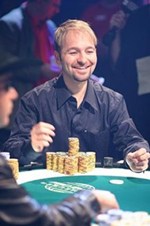 Daniel has Romanian descent because his parents left the communist regime there in 1967 to start a new life in Canada. He learned the game of poker at the age of 15 when he was starting his professional snooker career. He soon dropped out of high school to become a full time rounder playing at local casinos and illegal games. After dating fellow poker pro Evelyn Ng , Daniel left for Vegas the first time at the age of 22.

Kid Poker is a very sporting guy who likes to play golf with his peers and he’s a big NHL fan, mostly from the Toronto Maple Leafs. He’s a vegan since 2006, after being a vegetarian first since 2000. He’s world wide known as one of the most kind and popular players in the circuit, which he also proves at different charity events. He’s also the founder of the annual ” Big Swing ” charity golf event. Mr. Negreanu made famous cameo appearances in ‘ X-Men Origins: Wolverine ‘ and in ‘Lucky You ‘.

Kid Poker is also a regular in the highest cash games at the Bellagio. He’s a self-admitted action junkie playing his small ball poker strategy. He’s very outspoken about his poker results at his Full Contact Poker blog. For me, his best skill is reading opponents, he’s a real reading phenomenon. He played in all six seasons of GSN’s High Stakes Poker and he probably lost in all of them. Not because he played bad, but mostly because he’s one of the most unlucky players that I’ve seen. Remember Gus Hansen’s sick one outer on the turn when they both flopped a set. Daniel started his own online poker cardroom on his Full Contact Poker site where he launched 2 competitions in 2006 and 2007 to select a protege, whom Daniel would train into a world-class live tournament player. Mr. Negreanu released his book ‘ Power Hold’em Strategy ‘ in 2008, with contributions from several other poker players.

> plays online at PokerStars as a member of Team PokerStars